Ashes to ashes, dust to dust, Mr Incinerator you really ain't nothing but ashes and dust, your science failed my magic won, when you combine the two your done! 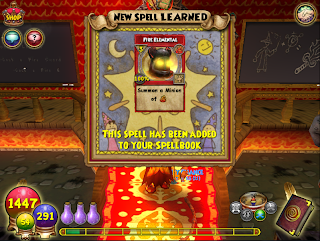 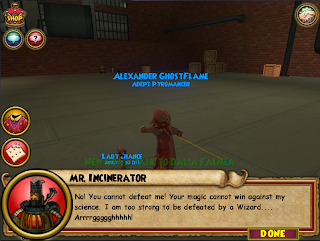 Haha yes with a little help from my friends *cough* Bailey IceCaster *cough* I was able to make it to Chelsea Court and a tactical battle ensued. I admit fire and storm are much more different than Balance and it's allowed me to change up my battling strategies. Being a Balance wizard I was use to coordinating with my team mates boosting them or shield plus tanking or cleaning up leftover foes whenever I needed to. Now however being on the offensive I am the one hitting hard and hitting fast it along with the battle strategies I've gotten from friends like Kevin Battleblood, Cassandra Dragonheart, and Alura Hexcaster.

I've learned to tweak my Balance skills and now I kill as fast as MOST of the storm wizards I know and play with. It's not bad either being back with a 67% extra damage to my Balance attacks making something seemingly feeble like Sandstorm to hit (With Gargantuan) 700-900 Damage. It's also allowed me to keep intact my traditional skills such as do I sandstorm of power up/shield my friend allowing me to be a triple threat. But enough of that I've come to say I got my Lvl 28 spell quest done and my Pyromancer Alexander Ghostflame has his fire minion spell! W00t! I've decided that my next wizard I'd most likely hit grand with is Alex cause as much as I  love defense (Ice,Balance) I really am enjoying getting those big hits!