Double feature: The fiery angel and The spirit of the Lamp.

So some readers really liked my last post about dragons so at their request cause I listen to my readers I am doing a double feature today the Seraph (Seraphim) and the Efreet (Djinn). Let's begin with the angels let's start with the Seraphim.

Lady Oriel and the Seraph spell both very identifiable within the Wizard101 world one begins our journey on Unicorn Way the other is a life school attack. Unfortunately these aren't correct here are some reasons why. First of Seraphs (Plural; Seraphim) are highest level of angels in the angelic hierarchy there names literally mean "burning ones" they were said to be so pure of light that not even other angels could look upon them. They had six wings two that covered their faces, two that covered their body, and finally two used for flight.

Seems like Lady Oriel and the Seraph spell are missing a couple of wings there ;). Also Seraphs along with Cherubs (2nd highest in hierarchy) were least encountered on earth as Seraphs were the caretakers of God's throne they also were always in song also being the highest in his heavenly choir they commonly sang "Holy, holy, holy, is the lord of hosts". There are also sources that mention that there wings weren't of light but of flame hence comes the meaning 'burning ones"

In Judaism they were in the 5th of 10th in the angel's hierarchy but still considered caretakers of God's throne and nearest to god. The name seraph(im) in earlier times was said to be serpent and that the meaning "burning ones" referring to the burning of coursing poison. 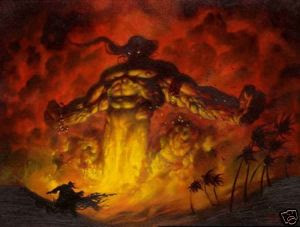 Now it's time to discuss another mythical being this is the Efreet or Ifrit he has may other names including Jinn or Djinn although Efreet is a negative connotation for Djinn.

They are considered Infernal (Fiery) class of Djinn or genie. They are almost always considered as wicked beings who wish to do harm as such the case in Wizard101 they do harm to our opponents :P. They part of the three sentient creations of Allah the others being humans and angels and in that order are only succeeded by the angels. They are also said to have free will like humans and can be a believer or non believer benevolent or malevolent. They also like humans have their own set of rule within their realm which is a parallel universe to the human world. In this universe the Djinn have kings, clans, and tribes. They also have their own cities were they inhabit.

They also breed and wed just like humans and are even said to be able to breed and marry humans. I have no idea who would want to marry a genie kinda tight living inside a bottle or where ever they inhabit. According to Islamic and Arabic texts Djinn (and Efreet) are made of smokeless fire and are able to shape shift. They are also divided into three subspecies Jinn who have wings, Those who take animal form, and those who fly about without wings.

Although Djinn can be good or bad or neutral humans have always considered them treacherous using their magic to harm humans.They are also said to be invisible to humans and usually view humans as not being clever or have wit. However despite all their magical qualities they are judged like humans on the day of judgment and like humans will be sent to hell or heaven depending on their deeds.

Tough break I suppose just like in Aladdin all that power but not a tiny space but required to be judge as humans do makes you think well they ain't all that powerful. My take on this is Djinn at least to me represent a darker side to humans they have the ability to do powerful things indulge as they wish free to go where ever whenever but are judged like us all. Good thing the only thing our Efreet spells are judging and punishing are our opponents then leaving them a present of a -90% weakness!