The Arena: PvP -Should I use this? Please don't call me that!

So recently I made a post about my initial views on PvP or Player versus Player and how they have ultimately changed over the months. This post however was inspired by a friend's comment on that previous post y'all know her as Paige MoonShade. Here is what she posted. 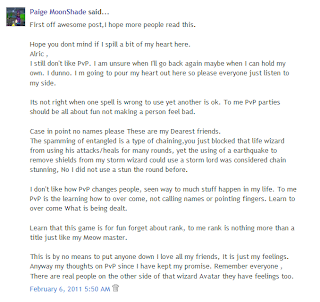 I know exactly was Paige is talking about in fact it's what deterred me away from PvP in the first place -- bad sportsmanship. Now I know sometimes people get in the moment it's only natural and we are flawed however intentional slandering is quite common in the Arena.Which why it makes people stray away from it. I am here to say like many other before me this isn't what PvP is about there are good people like Diana Wildheart, Kevin Battleblood, Fallon, and Cassandra Dragonheart who are gems they are great practitioners of good sportsmanship and even have provided advice for teams whether they have lost or won.

They though do not tolerate bad sportsmanship from other players who bash I've witnessed this first hand and it's unfortunate to see people actual people bhave in such a manner. A prime example was the recent Arena commentary party at Sir Winterbreeze's house the attitude was extremely potent with negativity and many people were booted I myself during a match had a nasty Life wizard who was just utterly rude.

This also brings me to another point of Paige's comment I have seen people bash others for using certain spells. There is no set way to play PvP nor should there be a set way it takes away from the the fun of it all to adapt and overcome a player or team with strategy and teamwork. Yes I would say using a bolt to break storm shields is an effective way but you might ALSO use a Lightning bats spell despite one saying oh you use that you noob the point is it's the way of the game, a person's style, and shouldn't be frowned at. But we use certain spells cause they give us a certain advantage and that's never a bad thing.

I myself usually don't pack many Ras or Judgements cause I rather use smaller attacks or I can use my Power Nova with hits for a modest 782 damage without blades and further helps my team by casting weakness. I had a person whisper to me that I shouldn't be using Nova cause Ra is better. yes Ra does do significant damage and can be Gargantuan however it's not just about me hitting the other team hard. It's also about supporting my team anyway I can say a teammate has only 1,200 life left I would Ra do nice damage but kill no one and a opposing player hits my teammate with a Storm Lord for 1300 damage (No blades). My friend is now knocked out and no longer can help his teammates and further cripples us. Now if I had cast a Nova I can bet he would of survived and been able to heal himself or further support while a player healed us.

Now the rank business I can care less as well it makes no difference no Warlord ever became one by winning every battle. If you look at any player there will be loses all the time. It doesn't mean you are any worse cause your only a Commander or Knight. It just means they have fought and played more to get that rank. Don't get me wrong every Warlord out there deserves their rank it shows they lost and overcame many battles but don't for a second think your too good. I've seen a few PvP matches where a Veteran or Sergeant took out a Warlord with ease.

Just keep in mind wizards like Paige said people exist on the other side of those avatars. Everyone has there way to play the game let them do it and who knows YOU might learn something.

Until next time your friend,
Alric Ravensinger

Posted by Alric Ravensinger at 12:21 PM