Hello wizards today's lesson with be on a Nidhoggr or Nithogg as it's sometimes called which is a giant dragon (sometimes a serpent or both) which dwells in Nastrond gnawing at the roots of Yggdrasil.

Now in Wintertusk Nordri (whom with his kin I consider vikings or perhaps Jotunn [giants]) task the player with retrieving a tooth from Nithogg who gnaws at the roots of the great tree Grandmother Raven resides on. 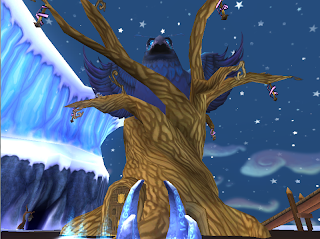 It's peculiar that they decided to use this tree as the the one Nithogg gnaws on cause as the legend goes it was Yggdrasil Nithogg gnawed at which would mean Nithogg below here should be gnawing at Bartleby's roots beneath Ravenwood. 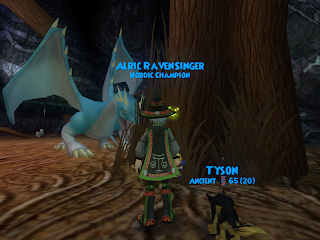 There is a connection to be made though from this pairing it involves 3 parties (technically 4) Nithogg, Ratatoskr, and Vethrfolnir.

I think KI is getting more and more inventive with what they put in game and although this is all speculation it's so exciting to try and decipher it even though it's from my own interpretations of the mythology. I advocate all you wizards do the same as there are many secrets to discover. So far Wintertusk is my favorite update and although quest experience was low Grizzleheim was always one of my favorite worlds to play in. Certainly KI has upped their game and rekindled my interest in Norse mythology bravo KI bravo! Any thoughts and comments are appreciated I hope you all enjoyed reading this as much as I enjoyed writing it.