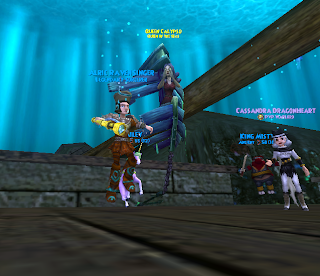 Ah yes the focus of this post is Calypso, Queen of the Seas. A boss like no other and my favorite boss added by the Celestia expansion. First off let's do this stat wise, Calypso is a Rank 10 Death Boss (I know Death, why not Storm but I might have an answer for that) with 7,785 Health She isn't too bad but Calypso has guards with her 1-3 Sea Booters depending on how many are there. Don't fret though if ONLY ONE person enters battle then they go away until the end where you'll have 2 Sea Booters waiting for you but they don't have to be fought. As far as cheats go Calypso is NOT a cheating boss. Although she does got a few tricks up her um arms? cause she has no sleeves :P She attacks with the Death ninja pig attack which does modest 490 of damage BUT more annoyingly after the damage you get slapped with a weakness! Bleh! She also likes to Wraith on the first turn or when she gets 6 pips so watch out for that but once the Sea Booters or as Kevin Battleblood calls "Blue Old Bums" are out Calypso is easy! I know I solo her all the time but it's just fun in groups! 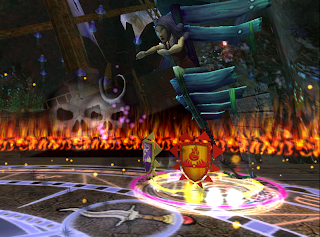 As far as lore goes Calypso is most famous for her role within the Odyssey in which she held Odysseus captive on her island for many years. Mostly she is mentioned as the daughter of the Titan Atlas but other accounts say she is the daughter of Oceanus (World Ocean) or Nereus (Old man of the Sea). Now back to her name Calypso now it's uncertain but it may be derived from Kalyptein which means to "Run away in Fear" which Apocalypse is also derived from. So some scholars say it's save to assume in very ancient Greece or Rome Calypso was a DEATH GODDESS! Which would explain why she is a Death boss or KI could just have done it cause she is undead after all. Soul and Ship intertwined! 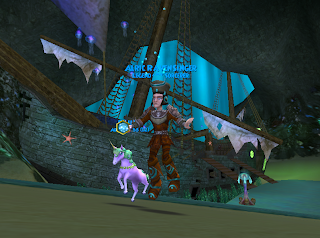 As for drops she drops good gold drops as well as the best version Lvl 58 Fire hat,Storm boots,Storm ring,and Athame. She also drops nice necklaces to keep or sell such as Vial of the Sun and Nova necklace.
For you pet hunters and gold savers Calypso also drops the Starfish pet so you can get the pet without shelling out the 12,000 gold at the CL Pet vendor. So this is your Boss special on the Queen of the Sea now go farm her for riches!