So today I decided to do a new pet love post I haven't done one in ages and it was of the Storm Bat! Today though we focus on a truly elusive pet. It's a pet many wizards *cough* Paige MoonShade *cough* have fought the pesky clockworks of Marleybone to get but so many fail yes you guessed it the Spider Golem! 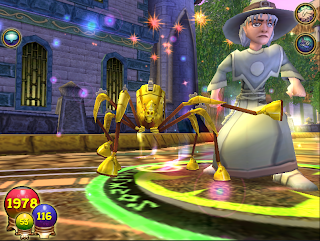 First let's just say how awesome it is Spider Golem your awesome with your jittery dance and awesome mechanical look! I remember when I first started my quest for pet hunting back in 09 the Spider Golem was going to be my crowning jewel cause up until the Advanced pets update it was the rarest and hardest pet to get in game it's no joke Kensington park was hard and Stoker a stubborn.....robot thing! Now however most people claim it's the Ianthine Spectre or Seraph but I've seen many people with those pets and so few even now with the Spider Golem. 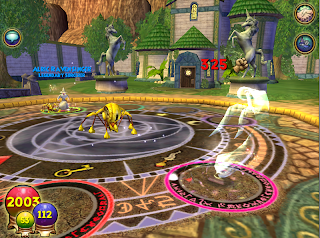 Let's take a look at the Spider Golem though ah yes one just needs to head over to the super reliable Petnome project website to view it's stats and talent pool Spider Golem. It is a Balance pet which makes my adoration for it resonate even more being a Sorcerer. It has a 55 Pedigree which is a nice considering it's a 1st generation pet and gives at Epic a card of the same name which does 325 Damage has 85% accuracy and casts a Power play (+35% Power Pip chance) bubble over the battlefield. It's not a bad card by any means but isn't particularly helpful either maybe in the right situation but that's just my personal opinion. Another problem that might deter people is in order to get the card you must train it to Epic which sadly most people don't like to do. It has solid stats across the board the highest being Strength at 250 and the lowest being Power at 200 coupled with 225 Will and a 215 Agility if you manifest talents like Add Balance or Unbalancer you'll have a nice 6% + I can almost guarantee that and possibly more through the hatching process. In comparison to other pets the Spider Golem's talent pool is also relatively standard Health and Mana gift, Add Balance,Unbalancer, and of course those lovely passive talents. However there is one talent that it has that is coveted by many it's a talent called Cloud O' Bugs which may cast a Balance spell according to Lady Judgement on Wizard 101 Central it casts a Locus Swarm with a constant damage of 305! That's awesome for us Balance wizards especially. (Click me). 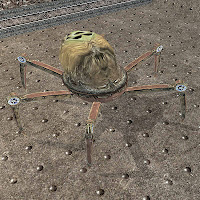 Lookswise Spider Golem is a little weird to some but to most it's pretty wicked looking. It reminds me of Centurion Spider which for those of you who don't know are creatures in the Xbox and PC game Elder Scrolls III: Morrowind! Which was a huge hit back in 2003 and won various awards including game of the year! see the resemblance Lol! Mostly what I love about it's design is it's expressionless face with it's piercing red eyes and the gear mechanisms in can clearly see in it's abdomen. 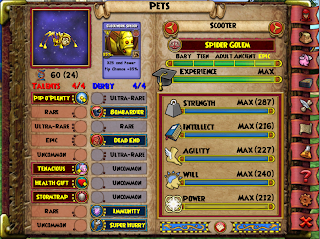 So in ending for those who wish to get this super awesome pet I'd suggest finding someone to hatch with but for those who don't want mixed talentpools the Spider Golem is dropped by Stoker (Second encounter) in Kensington Park be prepared for a long fight cause Stoke is at the end of the instance! I myself if you've read my blog acquired a Spider Golem via hatching only took 1 year but I got it! (Above is my Golem Scooter at Epic in TR!) So ends this edition of pet love and who get's a whole lotta love? the Spider Golem!