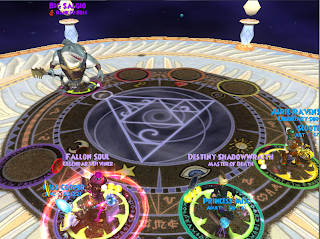 Last night was my true first night of actual fun and gameplay ITS! I got to see many friends I haven't in over a week like my super awesome tia Cassandra Dragonheart, Bailey Skystaff, and Luke Goldhorn! After it was all over though I was left not doing much and bang! I was saved by someone else s boredom Missy's to be exact! I had a blast with Missy, John Lifeglen, and of course Alura Hexcaster. We farmed for a nice bit in the Solar District and I was able to claw back from less than 10,000 gold to over 50,000 gold on the few runs we did. It does help though when you have a escort of veteran battling women who don't take names and make a killer (no pun intended) Shark fin soup! 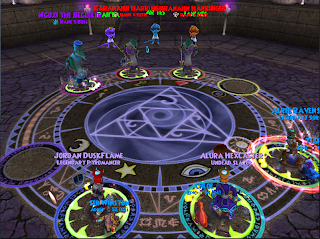 Afterward when Missy could no longer tell the sandman to go away Alura helped me along with her alt Jordan Duskflame (Fire)  FINALLY do the Tomb of the Beguiler I know very sad I had never done it before. It was a long but smooth run the amount of bosses was kinda eh but at my current power 67% to all Balance Attacks in case you are wondering ;) It was like fighting Mobs in Celestia. At the end of course Ngozi was defeated and all the little mander dudes were saved and this Sorcerer along with Jordan were given their Mander Savior badge! WOOT! WOOT! So fellow wizards,twizards,and since last night after that KICK-BUTT music conversation on twitter Rockin' twizards what have you been up to?

See ya folks the ROCK! and ROLL! is calling,
Alric Ravensinger

P.S. Shout out to all the rockin' twizard women you showed your stuff! you awesome girls make the rockin' world go round!
Posted by Alric Ravensinger at 1:32 PM