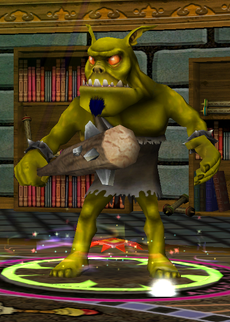 Yes in this edition of Creation I wanted to discuss about Trolls, not internet trolls but trolls of magical quality and discuss the histories of them which stem from you guessed it Norse mythology.


So all of us wizards who've traversed the Spiral know of trolls heck even if you haven't you must know of trolls as they are present in most works of fantasy literature and movies today. However you know trolls as a separate entity usually as a dim witted albeit exceedingly strong. I am here to tell you trolls were until in modern Norse mythology a sub group or species or the Jotnar or Jotunn. You may remember them from my last article on the Brothers of Nidavellir.

They are a race of Giants who populated one of the nine worlds within Yggdrasil, The world Tree or if you wanna W101 it Bartleby. It's quite a funny thing if you think about it in technical terms that the dim witted strong troll you read in that book was actually related to something like the Giants. Consider that Giants specifically in the Wizard101 world were primordial forces at the beginning of the Spiral. So you Ice and Myth wizards are more closer brethren than you may think.

But you are not entirely wrong cause as time has passed Trolls became a separate entity from the Jotnar (Giants) however many of their traits as Jotnar passed as they became separate. Let's see what they are.


See the similarities? Well I don't know of any Wizard101 Trolls being scared of sunlight or being exceedingly aged but the others are bang on I believe.

There are many stories that also don't abide by the traditional idea for trolls again I bring up the magnificent works of J.R.R. Tolkien. Many who don't truly read the books won't know in fact there was a sentient race of trolls on Middle Earth created by the Dark Lord Sauron himself they are known as Olog Hai. If you seen the movies it's the troll that gave Aragorn lots of trouble during the battle at the Black Gate at the end of the movie.

The Olog hai were improved trolls made by Sauron who unlike the other races of troll (except is the Mountain Troll but Olog hai had resistance to a greater degree) didn't have a weakness to sun light and were intelligent.
Trolls were originally creations of Sauron's master Melkor A.K.A. Morgoth who made them in mockery of the Tree folk you know them though as the Ents (Woodwalkers to Wiz101fy it Lol). The sun light turned them to stone like the trolls of mythology however the theory behind this in the Lord of the Rings is Melkor created the trolls from stones and so they reverted back to being stones when exposed to the sun.

Luckily for the people of Middle Earth after the War of the Ring all of the Olog hai were hunted and killed. Nothing is worse than a troll who can think as well as have the strength to crush your bones to powder. The Olog hai also could speak but only spoke The Black Speech or The dark tongue of Mordor. In that particular language Olog hai mean't "Troll folk". It is also noted that the Orcs and Goblins of Mordor saw the Olog hai in the same way as the Uruk hai because of both being improvements of existing beings and their resistance to Sun light and larger Intellect.

So rejoice the fact your not a troll unless your an internet troll but you don't wanna be one of those either they get the ban hammer frequently. Cause if you are a troll then that means your strong, old, and dumb not a good combination if you ask me. Feel free to comment anything else I might have missed on these slow but fascinating creatures and I hope you found out something you didn't know.