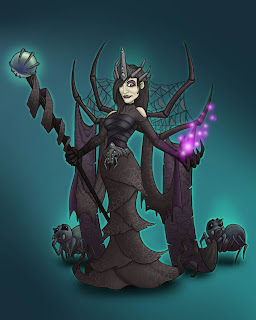 Today I wanna discuss something I am sure is on every wizard who aims to save the spirals mind --What's Morganthe's next move? This came to me after a lengthy discussion with friend Blaze Stormthief as we talked over possible plots and motives. Originally I had intended to write about the Onis and their relation to the Oni of mythological histories and their relation if any to the Kami. However I think this topic of Morganthe will provide more insight into "the now" and food for thought.


Now what we know is Morganthe was after the Celestian magic wanted it at all costs but the Celestians refused to let her take the magic. Why? why did/does she need the magic what does the Queen of the Shadow Web plan to do with such power? What's her relationship with Merle? How does this tie into the story? I will purpose my theories and speculations cause that's all this is after all.

Morganthe as most think draws inspiration from Morgan la fey or Morgana who was the sister or half sister of Aurthur who studied under adviser and great wizard Merlin. However I believe KI derived Morganthe from two characters in the Authurian legend Morgana and Morgause who like Morgana was sister/half sister to Aurthur and originally was the mother of Mordred who fights Aurthur at Camlann. That however is where it ends Morgause serves afterward as mother to many of the knights of the Round Table most notably Sir Gawain. Where as Morganthe originally appears as a healer and chief of the nine sisters of Avalon "The Isle of Apples".  In later works she appears as an enemy to Merlin and Aurthur.

Now chew on this what if Merlin and Morganthe were originally students or Morganthe was Merle's student. Morganthe plays a similar role under the tutelage of  Merlin as a healer possibly even a Life wizard. However like all that's pure can be diluted and tainted Morganthe wants more power. What if while Morganthe focused on the powers of healing Merle focused on Astral Magic. Morganthe saw the potential and sheer power of the astral magic of course she wanted it for herself. Also throw into the mix if Bartleby wanted them to learn respective magicks for the benefit of the spiral however the same thing unfolds Merle has power or discovers something Morganthe wants and so begins her quest.

Merle refusing her she turns to the source the Celestians themselves who in turn refuse her as well. So as Spiral history states she raises up a dark army (Inferi anyone? Lol) to combat the Celestians. They put up a good fight but eventually lose and Morganthe loses her army. Now think of this Morganthe presumably is at the bottom of the ocean like with her army but manages over the centuries to survive sound familiar?

For those of you not versed in the literary works of J.R.R Tolkien I will divulge. In his work Sauron also known as Annatar Lord of gifts tried to destroy the Numenor Civilization from within but in the end when Eru destroyed not only the king and his mighty navy but sunk all of Numenor into the sea Sauron however survived but thereafter wasn't able to take fair forme again.

Morganthe going to the source might have no wholly seemed evil yet not even to Merle who I assumed however had his suspicions. Studied among the Celestians but decided to take the magic by force after she was denied and tried to destroy the Celestians and take it for herself. This also brings similar trait from another character in Tolkien's Legendarium Saruman who was chief among the Istari (Wizards) until his work with profane objects like the lost seeing stones of Numenor corrupted him into the service of Sauron. Saurman like Morganthe wanted the power for themselves Morganthe CL magic and Saruman the ring.

Like with Numenor however Morganthe like Sauron hadn't expected for the the turn of events that took place. As Sauron had hoped Eru would only destroy Ar-Pharazon (The king of Numenor) and his navy Eru sunk the entire blessed realm beneath the waves. The Celestians also had that same foolish hope but in the end the Storm Titan sunk all of Celestia. This is the gray area sort of just as Sauron originally wasn't evil neither was Morganthe at one point. In fact before he became Sauron Chief Lieutenant to Morgoth (Melkor) Sauron was known as Mairon meaning Admirable and lesser god (Maiar) in service to Aule, The Craftsman of the Valar.

The question remains though what exactly does Morganthe plan to do with the Celestian magic? What exactly can she do with it? Is it that bad that even the indomitable Merle fears her? With the power of the Celestian magic in her hands what exactly can she do? Unlike our friend Malistaire who although was a great wizard couldn't of been able to control the Dragon Titan even with the Krokonomicon. Maybe Morganthe has the knowledge to control such divine beings and bend it to her will? Possibly with the power of a divine being such as a Triton or Titan Morganthe wants to exact revenge on Merle for denying her first. Who really can know only the minds working at KI do.


I ask you readers now if you have your own theories comment on this post with them. I'd love to hear your take on this new story arc or perhaps expand on what I've said here today. All in all it's speculation but we can always hope right?